Back in February my older sister was diagnosed with stage 3 Ovarian Cancer. It was mind numbing to my family. There are 6 of us so the prospect of one of us getting cancer was always there. But here we were, dumbfounded by the news. While my other sisters rallied in their usual supportive manner, planning to walk in marathons and making t-shirts I took my usual manner, inwardly developing my feelings about the subject. I sent care packages of books I thought she'd like to read while recovering, and head scarves to wear after she lost her hair. I cut my hair, but that was mostly because I was going crazy with it long and I needed a cooler cut for summer. I didn't get teal high lights like my other sisters did, nor was I able to afford a trip down to take care of my sister or her family during her chemo treatments (or for that matter could I get the time off work to do it).

In August my sister entered remission and finished her chemo rounds. My family was rejoiced, relieved but far from finished in their efforts to stand up against cancer. My sister had her genes tested and a week before I started my new job with the school district I received a devastating call.  My sister's test results had came back positive for the BRCA1 gene. For those of you unfamiliar with this BRCA1 is a gene carried in families that causes Breast and Ovarian cancer in females and Pancreatic cancer in males. Those of Ashkenazi (Germanic) Jewish decent are most likely to carry the gene. 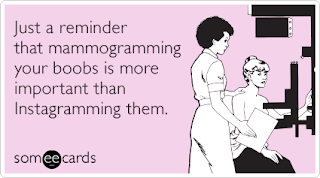 My annual was already scheduled but now I had to call and talk to a nurse about why I also needed to include a mammogram to my appointment.  So let me just tell you, from start to finish this was a ridiculously painstaking effort. My initial call to my doctors office asking for a mammogram when I'm clearly 10-20 years younger than the average person getting a mammogram was ridiculous. I felt like I had to talk the nurse into letting me get one (which believe you me, if my sister's oncologist hadn't requested we all start getting early mammograms I most certainly would not be making an appointment for one). The nurse seemed suspicious of my my reasoning to want a mammogram. She told me she had to call my doctor and discuss it with her and that my doctor may require a letter from my sister's doctor confirm my sister's diagnosis.

Luckily my doctor didn't feel the way my nurse did and told her to schedule me a mammogram. This required my doctor's appointment to be rescheduled and ended up being moved up two weeks.  So there I was not quite 30 years old and less than a week away from having my first mammogram.  You can imagine, I had no idea what to expect short of torturous pain. Luckily google stepped up and helped me (I assume google also helped you find your way here). But for all the help google was, all it told me to prepare for my mammogram was to not wear deodorant to my appointment. Easy for you to say google, you don't have to go through a whole day dealing with kids in a high school before a nerve-wracking appointment to get your books squished between two plates.

The day of my mammogram came and I was prepared, I showered in the morning and was careful to not wear any lotion, deodorant or fragrance above my waist. I packed my deodorant in my purse and a bottle of ibuprofen which I took a half hour before my appointment (for all the good it did me.) 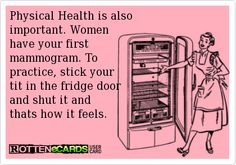 Now my doctor is through a woman's center so it is staffed by women (thankfully). And my mammogram tech was a woman and she carefully placed my breast between the clamp which was thankfully not as cold as expected considering it was metal on the bottom and then she clamped the clear plastic shelf down. It was like getting your breast squeezed in a metal clamp. It knocks the air right out of your lungs but it only lasts a moment before she snaps the photo and the clamp releases. Then she turns it sideways and you are twisted into a strange position as the clamp comes down a second time to take a side view. Then she does the other side. This process lasts all of 5 minutes and it takes more time for her to situate your breast on the plate than it does for her to take the picture.

Then it was time to dress and go to my doctor's office across the hall where I had to undress completely for my pap smear. I won't go into details of that but needless to say during our conversation my results came back from my mammogram and they came back funny. They saw a spot on my left breast by the nipple. My doctor explained to me that I would need to go to the cancer center to have a second mammogram with the radiologist present. She told me there may also be an ultrasound and that there was nothing to worry about. She told me she hadn't felt anything in my breast exam and and she was sure it was just because of my age and my breast being denser than an older woman's. 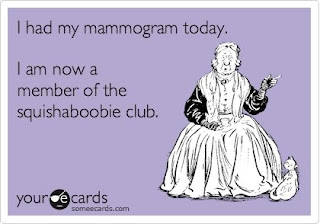 Needless to say I was pretty bummed leaving my appointment but determined to put my usual brave face on. That was my first mistake. When you get an abnormal mammogram, everyone tells you to not worry about it. The statistics show that only 10% of women who get call backs on mammograms actually have cancer. It's all great and you shouldn't worry for nothing. Except having gone through it myself- I realize that not worrying caused me to be more stressed and high-strung when it came time for my second appointment.

I generally adopt the attitude that when something bad happens that you shouldn't think or worry about it it until you have to. And this normally works for me, but this time it backfired fast in my face. A week later I found myself crying hysterically in the ultrasound room while waiting for the radiologist to come in and tell me what they found.

Being told you have an abnormal lab result in a mammogram is scary and it's normal and natural to be frightened by it. I wanted to talk to my spouse about my fears but he is so fragile when it comes to this sort of thing I felt I couldn't and he seemed to be shut down about it. People told me not to worry about it and that I would be fine and I felt like I had no one to vent my frustrations to. No one wants to talk about what happens when there is an abnormal lab result. No one wants to discuss the possibility of something bad happening. I also feel like if you are in the unlucky 10% that does have something the matter and you spend a week telling yourself that "it's nothing" only to discover you have a tumor that you are setting yourself up for a serious wreck. 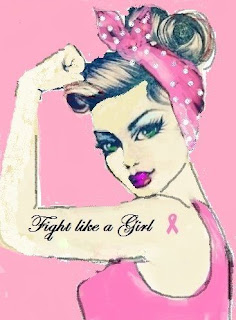 With all the breast cancer walks and ribbons and Facebook posts women are still afraid to talk about what happens when your result from an initial mammogram has a spot or a bump or a speck. We are afraid to let ourselves be afraid and we are doing each other a huge disservice by not being there to listen to each other and talk about the fear that comes with "additional images needed".

Posted by La Bouilloire Noire at 8:02 AM

Labels: BRCA1, Breast Cancer, how to deal with an an abnormal mammogram, mammograms. What to expect for a mammogram, Ovarian Cancer, time to talk about the call back, why it's ok to be afraid