2012 Academy Awards Fashion Round Up

I was called into work last night so I missed a lot of the show but I managed to catch the last hour of it and here were the fashions that really stuck out to me. 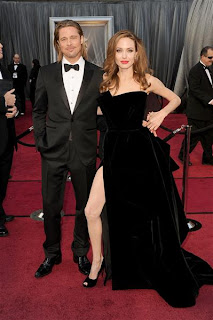 Brad Pitt and Angelina Jolie.- Just looking at Angelina I have to say it's impossible to look at her dress because of that silly pose she stayed in the whole night and the fact that she looks like a starving child in Camodia. As one person wrote "Rich people shouldn't starve themselves when there are poor people starving all around the world," and I agree and wonder why a woman who spends half her time tromping through third-world countries doesn't realize this. 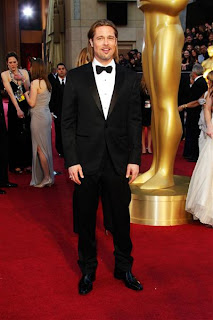 Looking at Brad Pitt alone, he looks a bit like a little boy dressed up in a grown man's suit. Those tails were a bad idea and they make him look really short. Also, he needed to have his pants hemmed. 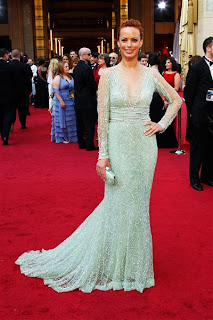 Bernice Bejo, I admit I never heard of her before but she starred in The Actor and I love this dress. I kept starring at it the whole night. The only thing that kept it from being my favorite look was her bad hair style. Even the color looked wrong for her and the dress. 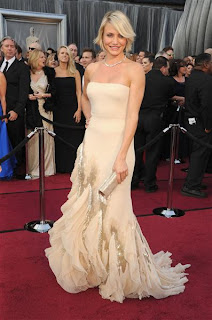 Cameron Diaz. What can I say? It's a nice dress. It isn't amazing and she could have brushed her hair because she looks a bit like she's still in There's Something About Mary with that hair do. But she looks OK. 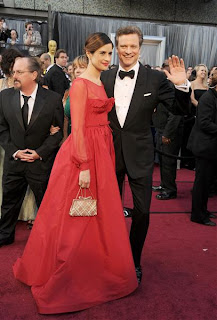 Colin Firth with his wife. It's Colin Firth. What more do I need to say? He's Mr. Darcy for heaven's sake! 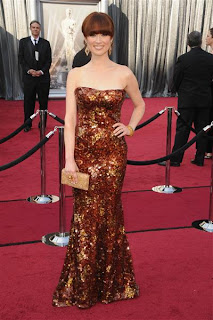 I don't know who Ellie Kemper is but I stared at this dress when she came on screen. Pretty sure when she takes it off it will still hold the exact form of her body. Still not sure how she wore it without cutting herself the whole night. 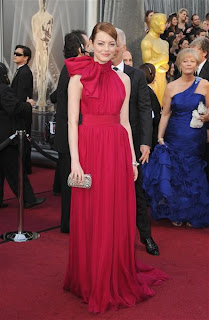 ﻿
Emma Stone. For some reason this dress makes me think of a dress Nicole Kidman wore a few years ago. Oh yea, she did wear the same dress.in 2007 for the CMA... 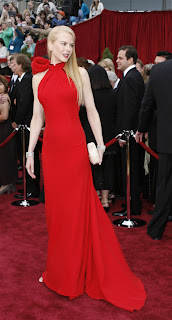 Oh well, I still think Emma Stone looked very nice althought I was worried for a bit while she was on stage that her boob would pop out. 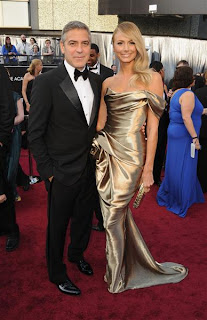 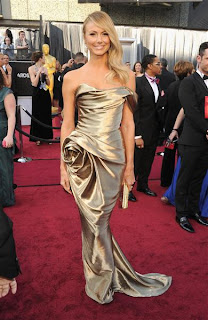 I have to say the top part of Stacy Kiebler's dress was amazing, the hip thing was stupid looking though. Too much draping with out any idea on where to put the fabric is what results in dresses like this. 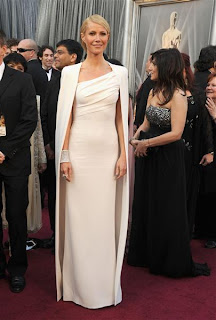 Gwenyth Paltrow looks like a great big bowl of vanilla ice cream which is to say she looks like she always does. 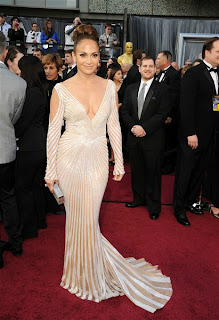 Jennifer Lopez. Eeh, she looks a bit like a sexy Statue of Liberty but with hair pulled back so tightly it looks like she had a face lift. I guess I think a woman as sexy as Jennifer Lopez doesn't need to try so hard. 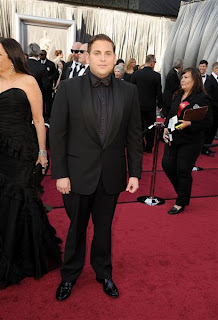 Jonah Hill looks very sharp in my opinion and he dressed in his own unique style and I think it worked. 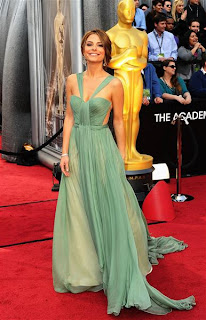 I don't know who Maria Menounes is and I'm pretty sure I couldn't say her name or spell it off the top of my head but I had to throw it in because when I saw this picture I wanted to know how she kept the top of her dress on without it falling off. 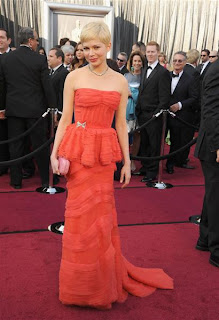 I loved Michelle Williams in My Week With Marilyn but I think the proportions of this dress were just off and didn't work for her. 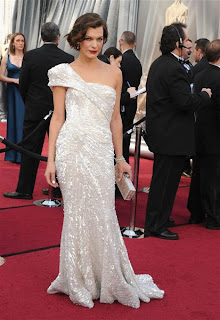 Milla Jovovich looked amazing. She's one of my favorites on the Red Carpet last night. I honestly think she did everything right, the hair the make up the dress, the jewelry was all perfect. 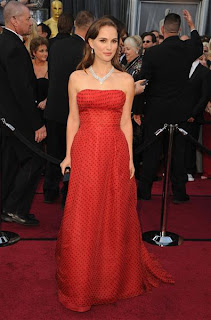 I love Natalie Portman and I think she looked amazing last year. That being said, she seemed confused this year. The necklace is stunning but it didn't go with the dress and I guess I wouldn't have picked this dress for her since she is a mommy now (a young, hot mommy) but I would have dressed her out of her teens. 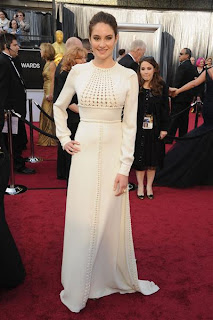 On the other hand Shailene Woodley is a teenager and she's dressed like a 1970s 40 year old mom of 2. I think she should have worn Natalie's dress and had it cut shorter. That would have been amazing. 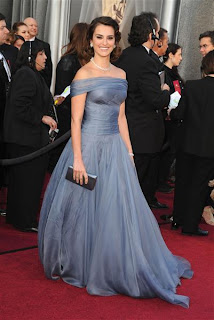 I loved Penlope Cruz's hair. I think the dress was way too long for her and it looks awkward in the front and I'm not a fan of the color. But her hair was beautiful. 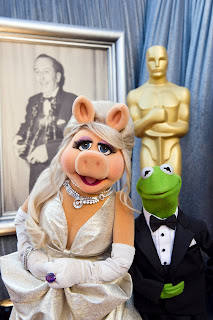 Miss Piggy and Kermit the Frog are hands down the winners for the Best Dressed Couple on the carpet last night. They looked amazing and I loved Miss Piggy's hair. Kermit's suit fit him perfectly and it was classsic and they both looked great. 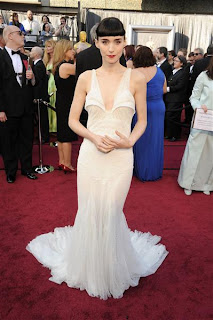 Rooney Mara looked like she stepped out of Black Swan. I'm not a fan of this dress at all.It makes her boobs look very strange and unnatural and the color was just bad. 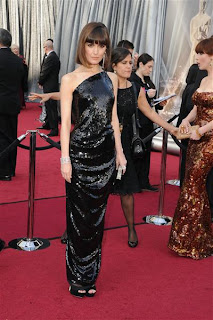 Rose Byrne is one my favorite looks on the carpet. I loved her hair, her make up, her dress- I hated her shoes. They ware aweful but otherwise she is perfect. 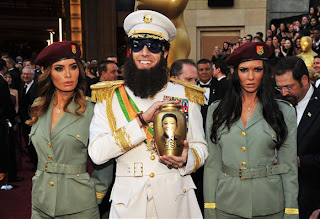 Sacha Baron Cohen takes the award for biggest prick on the carpet. This was so inappropriate and not OK. I can't believe they even let him in the building especially after the stunt he pulled on Ryan Seacrest. Not OK Sacha and I hope no one goes to see your movie now. 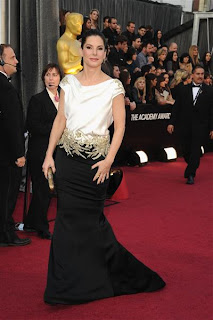 Oh Sandra Bullock, why oh why do you insist on dressing yourself? Someone needs to tell her to stop because it's bad choices like this that make her the butt of jokes. I can't say anything, I'm sure Joan Rivers will have plenty to say though. 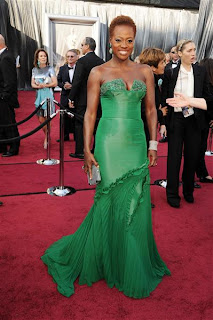 On the other hand, I can say something about Viola Davis' bad prom dress. It's aweful! It's an aweful green and someone should have told her the only green you wear on the red carpet are emeralds but apparently no one did and now it's too late to go back and change it. 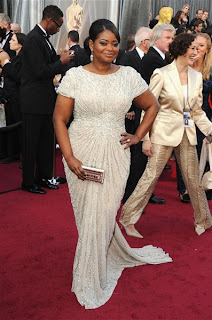 Last but not least is Octavia Spencer and I saved her for last because you should always save the best for last. That's right, I'm declaring it- she was the night's BEST DRESSED STAR! She looked amazing and I loved her in this dress. Her hair was beautiful, her make up was beautiful, her jewelry was beautiful and I don't know what her shoes looked like but I bet they were also beautiful. She looked stunning and I think she shows women everywhere to love themselves and that you are beautiful no matter what size you are.
Posted by La Bouilloire Noire at 8:21 AM